Separate modules can be added to the flowchart view via dragging and dropping (see Editing Create Modules for a demonstration) and edited by double clicking on the module. There are 2 types of Separate modules.

When this Type of Seperate module is chosen an incoming entity is duplicated into multiple entities. When duplicating entities, the specified number of copies is made and sent from the module. The original incoming entity also leaves the module. NB: Rules for allocating costs and times to the duplicate can also be specified by the user. A good example of where a Seperate module would be used to duplicate an original entity is in parallel processing where a single order may undergo several processes (such as billing and fulfilment) at the same time. A flash movie example of a Seperate module duplicating an original entity can be found in the case study: Courier Service Model (see the movie "Adding a Timing Entity to Courier Model"). 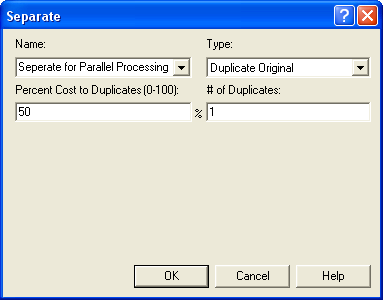 This Type of Seperate module is chosen to split a batch of entities created earlier (via a Batch module). When splitting existing batches, the temporary representative entity that was formed is disposed and the original entities that formed the group are recovered. A good example of where this type of Seperate module would be used is to split a previously batched set of documents. A flash movie example of a Seperate module splitting an existing batch can be found in the case study: Courier Service Model (see the movie "Adding Deliveries to Courier Model"). 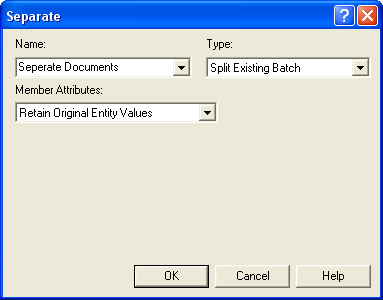